Louise Bourgeois died in May 2010, and since 2009 had been collaborating with Tracey Emin on a series of sixteen drawings/paintings which are exhibited in print form.

There is something deeply psychical about Bourgeois' work and these prints are evocative of psychic space, while at the same time being intensely physical, addressing sexuality, love, motherhood and relationships between the masculine and the feminine. 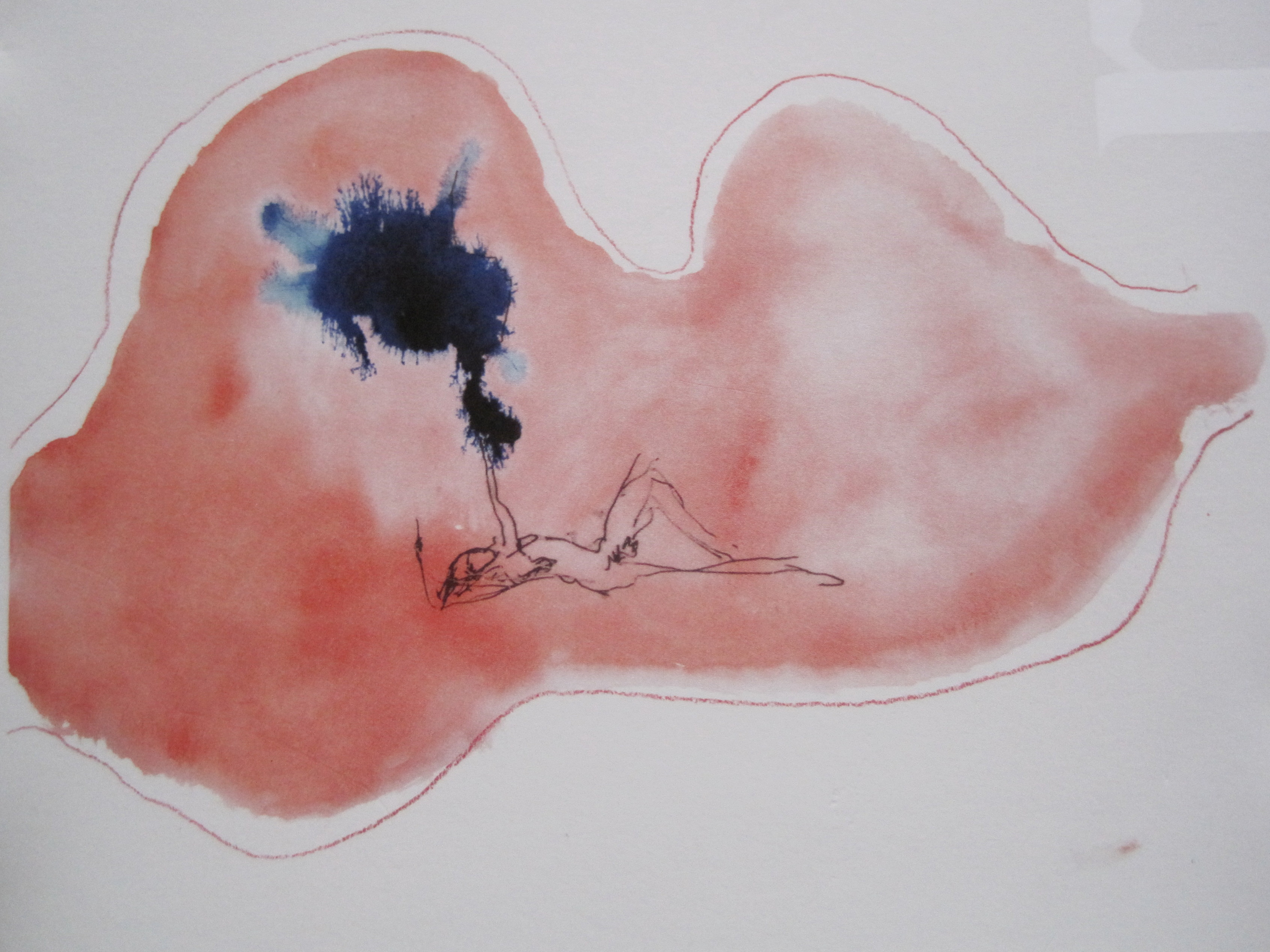 Bourgeois' part of the prints are iconic torsos whose messy flesh, blood, foetuses and sperm are contained within delineated boundaries. Emin invades those boundaries like a daughter to Bourgeois' mother position, and yet the psychic space generated suggests also common female identification where age doesn't limit possibilities.

Emin uses characteristic words to add to the emotional and communicative power of the painted torsos. Also, small female figures lie sexually supine within the female torso space, as in 'I wanted To Love You More', or kneel before an erect penis, like visual 'internal objects', desires and aspects of the self; defences and relations. 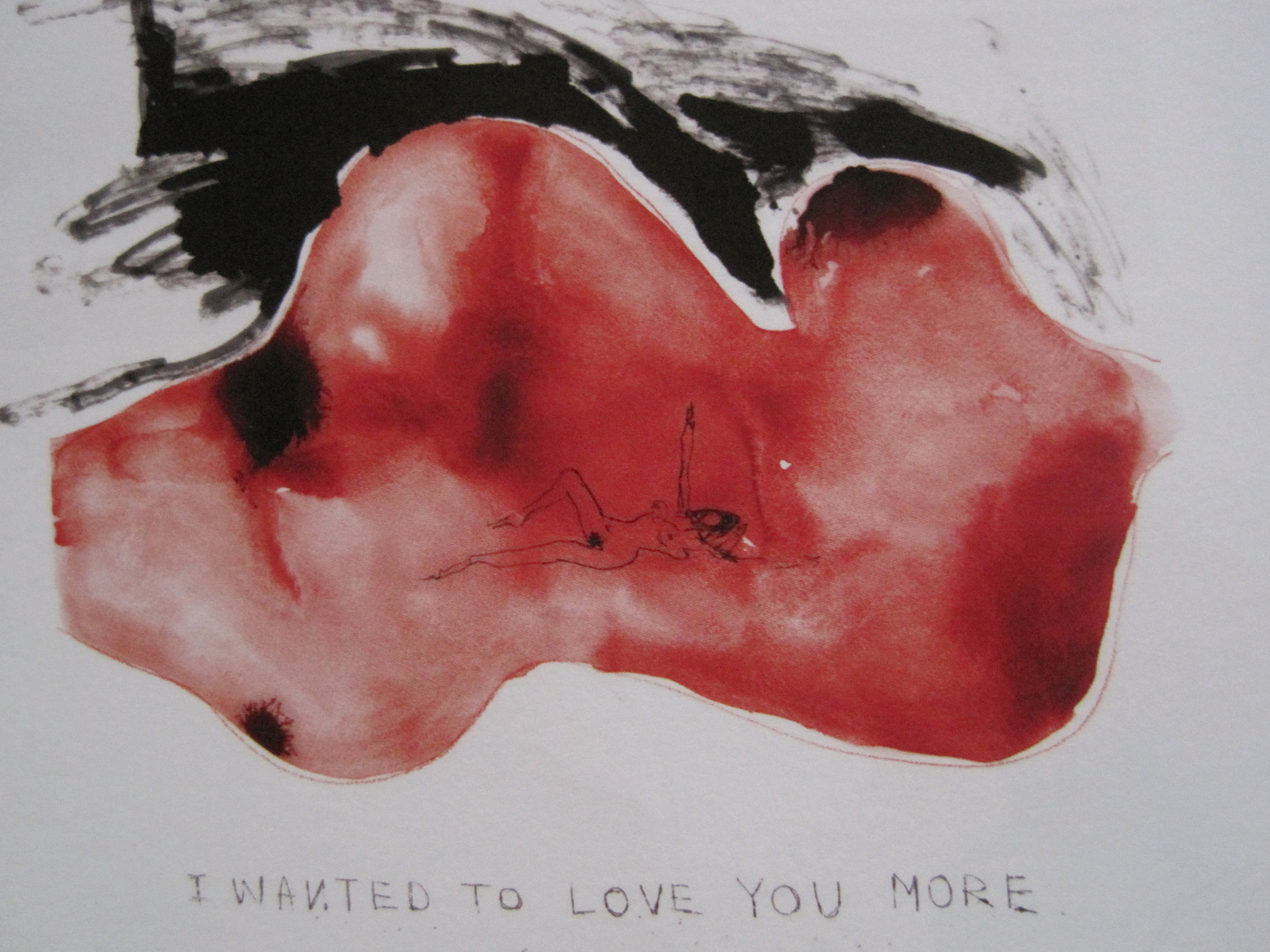 In this way, Emin amplifys Bourgeois' psychic/physical language with her own personal experiences of sexuality, abortion and loss. The writing introduces the traditionally 'masculine' aspect to Emin's contribution. There is ambivalence though as words are sometimes crossed out or are printed in reverse, as are occasional letters.

Bourgeois anticipated this exploration of psychic space, continued in the work of Emin, and other women artists like Sarah Lucas and Gillian Wearing.

The foetus and the phallus are the essential 'objects' for woman and man, and these powerful images and the collaboration between the two artists explore that quality in fundamental terms. 'Part objects' are emphasised by Bourgeois, the erect penis is painted blue against the fleshy tones of the male torso. Nipples, vagina and anus are singled out by being painted brown, (a humourous aspect too). The foetus is indicated with blue effervescences of paint. The torsos - also part objects, but never-the-less suggesting the whole figure, sans arms and legs, also assume the quality of landscapes. And yet we can't forget their boundaries, the containing outlines for the paint to interact within.

In one image, "You You You" is inscribed by Emin, underneath a painting by Bourgeois of the topography of splayed legs towards an open vagina - "You kept fucking me". In another image of a woman's torso with a foetus inside - "I Love You You I Love".

A figure by Emin reclines within an abstracted torso shape. In this sense Emin returns the forms to 'Whole objects' and, to what Hanna Segal thought was so important to creativity, Melanie Klein's 'Depressive Position'. We have been through the 'Paranoid - Schizoid Position' in terms of the part object relating of Bourgeois's torsos, to Emin's contribution which is depressive in terms of the realities of sex.

"There was no room for me anymore", she inscribes within a female torso, "you squeezed me out of that space like I was never wanted." Emin's lived experiences are channelled into the work with both humourous (one painting has "sexy mothers" inscribed under a male torso inside which Emin has drawn two women posing provocatively) and intensely serious intent.