A Beginning and an End

In the exhibition Apeirophobia - which means a fear of the future - Karin Kihlberg and Reuben Henry explore the qualities of different media through aspects of discontinuity and death, space and time. The exhibition consists of several works in different media: Unbindable Volume, a three-channel video work; Abandon in Place, sculptures based on architectural maquettes; Acting Dead, a series of drawings of actors in popular feature films playing dead; and Apeirophobic Framework, a gallery-based installation of video, construction and C-type prints.

I experienced a gestalt moment after looking at all the work, a sense of past and future, of space and time, and above all of inevitable change.

Using a variety of media enables Kihlberg and Henry to express through the different aspects of those media the essence of their preoccupations, contrasting the drawings of 'playing dead' actors with the sculptural objects of Abandon in Place which have a science fictional quality, probably partly due to the contrast with the installational 'set' of Apeirophobic Framework. The forms of the upturned ziggurat of Birmingham Central Library are at the same time resting on a construction element which takes as its reference the Apollo 1 launch pad. This launch's catastrophic failure is commemorated by the pieces, which combine the failures and hopes of the past with the potential efforts of the future.

Unbindable Volume, the three-channel video, makes clear that the future might well include the decline of the book. "Our ignorance about the new codes is not surprising. After the invention of printing, centuries passed before writers learned that writing means storytelling. At first they only documented and described scenes. It will take us just as long before we comprehend the virtualities of techno codes... It will take a long time before we achieve a posthistorical conciousness, but we recognise that we are close to taking the next decisive step, either stepping back from texts or all the way past them." [1]

As such Kihlberg and Henry dramatise through the use of an official narrator, as though in a public service video, and document the life of a building, Birmingham's Central Library, a key site of the move towards a posthistoric conciousness, and the decline of the book. The video shows the offices with piles of paper, and the bookshelves, in monumental terms, with no people around, as though the system is/was already redundant. They address our fears about the future, attached as we are to the book's physical qualities, and suggest "Records for which there is no longer any need." [2] 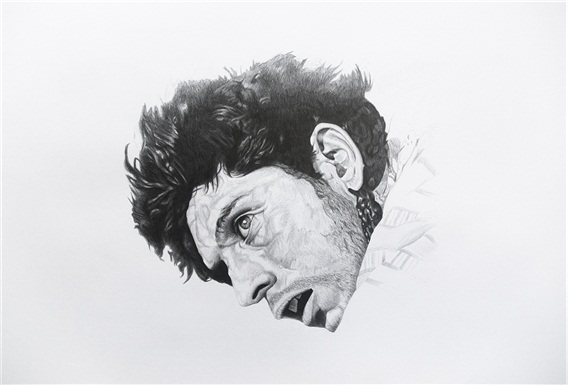 Acting Dead - the portraits of actors playing dead, address how we feel about discontinuity and death, and how this relates to the discontinuous art object, in this case through drawings. "These works suggest a dismantling of linear narratives, such as cinematic narrative or architectural narrative." [3] As the actors are drawn from stills from popular feature films, a link is made between the historical, the popular telling of a story,and the processes through which they are portrayed as becoming possibly redundant in the future, in a posthistorical era. The continuities of film are contrasted with the discontinuous processes of drawing, through the subject matter. Actors 'playing dead' make the connection with death and endings, while in reality it is simply a stage in their acting careers.

The 'set' or constructed space within the gallery intervenes in the exhibition space, as an act of re-configuration of the space to highlight its 'architectural narrative'. The construction was then used to 'exhibit' the drawings, which were photographed while they hung in that constructed space, and then these were exhibited as 'historical' artefacts. This play with space and time was therefore apprehendable, the drawings having been moved to one side, behind the 'set' revealing exhibition practice itself as an historical construct. This raises issues of 'will there be any need in the future for a sense of discontinuity?' Probably. Although perhaps there will be a new perception of the discontinuous. "The end will arrive gradually." [4] says the narrator of Unbindable Volume. This is in the sense that we don't conciously notice change most of the time. The future is meanwhile approaching and Kihlberg and Henry make a sense of it perceivable.