This is a complex exhibition in linguistic terms. Caroline Bergvall is AHRC Research Fellow in the Department of English, University of Southampton. She has prepared several texts, and she juxtaposes the visual with the aural in this act of poetic cultural inquiry. 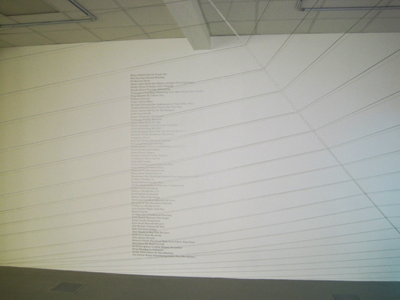 The main visual component is the installation Length of Weighted Wire which traverses the gallery space, like visible sound waves. Designed and realised by DvsN with Bergvall, the effect is to draw attention to the architecture of the space and the "inner structure of language" [1], which is partially realised through spatial interaction with another piece, Wired Madeleine (1DJ2MANY) which is a text and sound based composition in the same space. This is described as "Love memories in globalised anglo consumption" [2], with the illusion of the 'dial turning' as Bergvall reads lyrics from pop, funk and indie songs. It is like a science-fictional study of human behaviour. The installation meanwhile gives weight to the aural texts.

In another part of the gallery is Wall of Pins where four texts, written in 'trans-English' by Bergvall are repeatedly pinned to the wall. 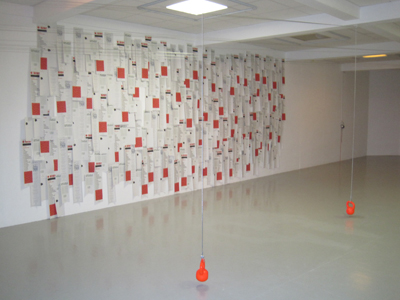 Wall of Pins and Length of Weighted Wire

The trans-English includes sci-fi, horror, city lingo, Chaucerian glossary and quotes, biligual code switching and texting. The texts: Fried Tale, which is based on Chaucer; Osis; Dame Just, a political inditement against the Houses of Parliament, and Blot, which brings to mind Bourriaud's archipelago as a metaphor for alter Modernism and transition culturally, are 'broadsides' that are free to the gallery visitor as "Texts only exist if they circulate". [3]

There are then three headset pieces under the title Voiced Whirr. Particularly key to the whole exhibition is the third of these Personal Cropper which is Bergvall's autobiographical text piece in which she explores her interest in language and cultural identity. She describes it as "A pathway from individual isolation to cultural engagement", [4] and explains in more general terms: "Force applied to language eradicates whole strands of individual and collective body shape." [5]

This is the problematic of the collective body of people as much as the individual being able to find their identity and cultural security. As she comments: "How does one keep one's body as one's own? What does this mean but the relative safety of boundaries?" [6]

This piece is then elaborated on in Way Station (crop) a biligual audio text in English, French and Norwegian. The question of 'body' is combined with Glissant's Poetics of Relation, and this is a piece more about the collective: "Some never had a chance to know their body before it was taken away." [7]

Bergvall's concern with collectivity and the translation of identity continues online, in Lines of Flight, a generative data piece, designed by Alex Prokop in collaboration with Bergvall.

This show is a must-see if you're interested in transcultural developments!