Can computers be creative? This is the essential question raised by this exhibition, curated by William Latham, Frederic Fol Leymarie at Goldsmiths Department of Computing
and Anna Frants and Elena Gubanova from the Cyland Collective in Russia.

This exhibition is like a mini expo and focuses a lot on interactivity. Laura Dekker's (UK) piece "Expressive Machine #2" was very striking and consisted of a couch you could sit on which was machine wired. "It waits for your touch" and then responds in a machine learning way by telling you how you taste : "salty. bitter. sweet. sour. umami?" The Expressive Machine #2 senses things in itself as well as in the world. I assume from the description that it is programmed as a neural network which is how it would be able to learn and respond. 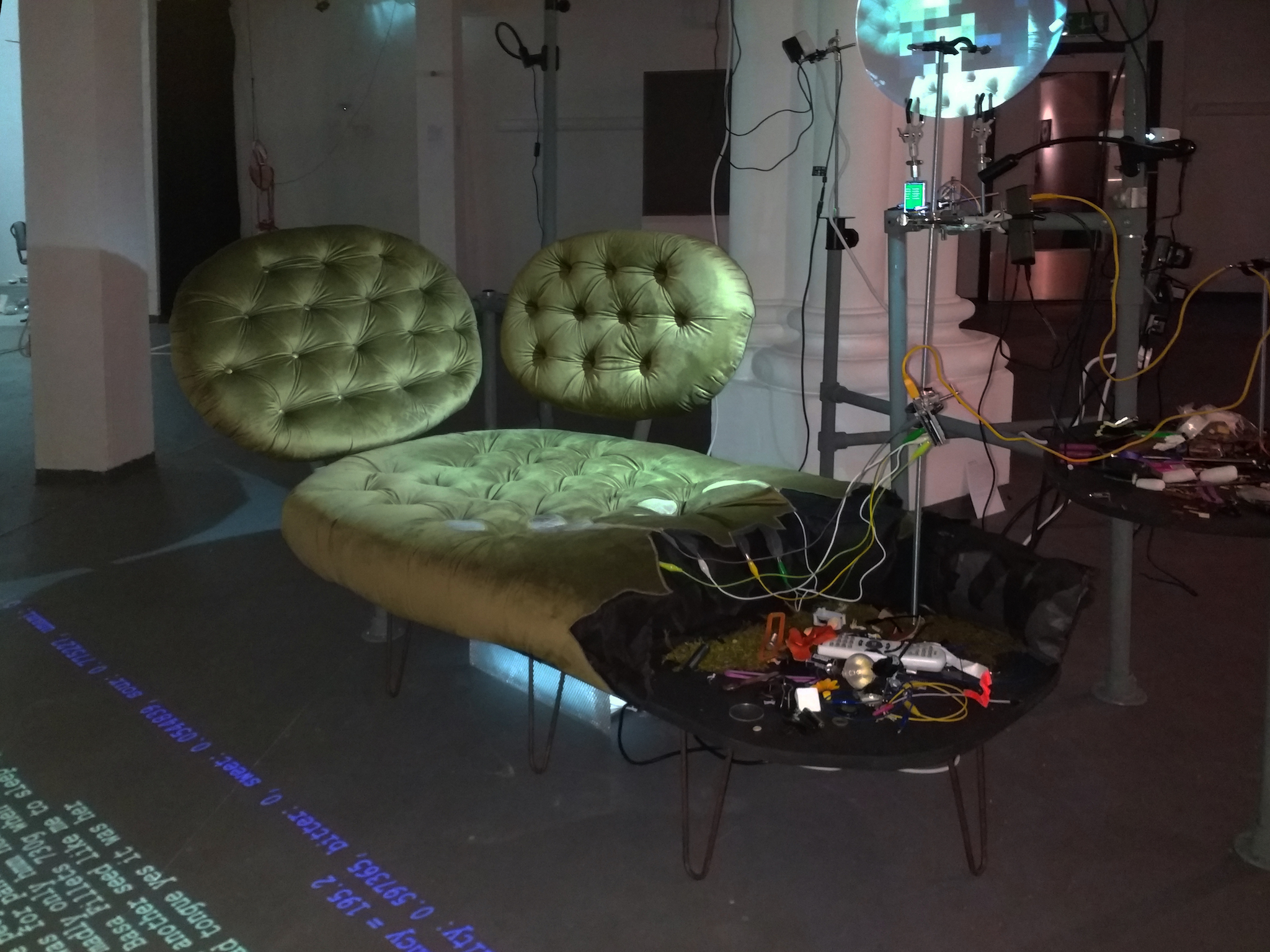 "Breathless", an interactive installation by Alexandra Dementieva (Belgium) was another intruiging piece. Three 'cages' or light objects shaped a bit like a rib cage which you could stand inside. The light distributed along the structure of the cages responded to breathing into an airspeed sensor. Two of the cages were connected to RSS feeds via computers which search for all words related to 'fear' and 'desire'. The third cage uses an anemometer registers wind, temperature and noise of the street environment outside. This work reminded me of Char Davies' 'Osmose'. 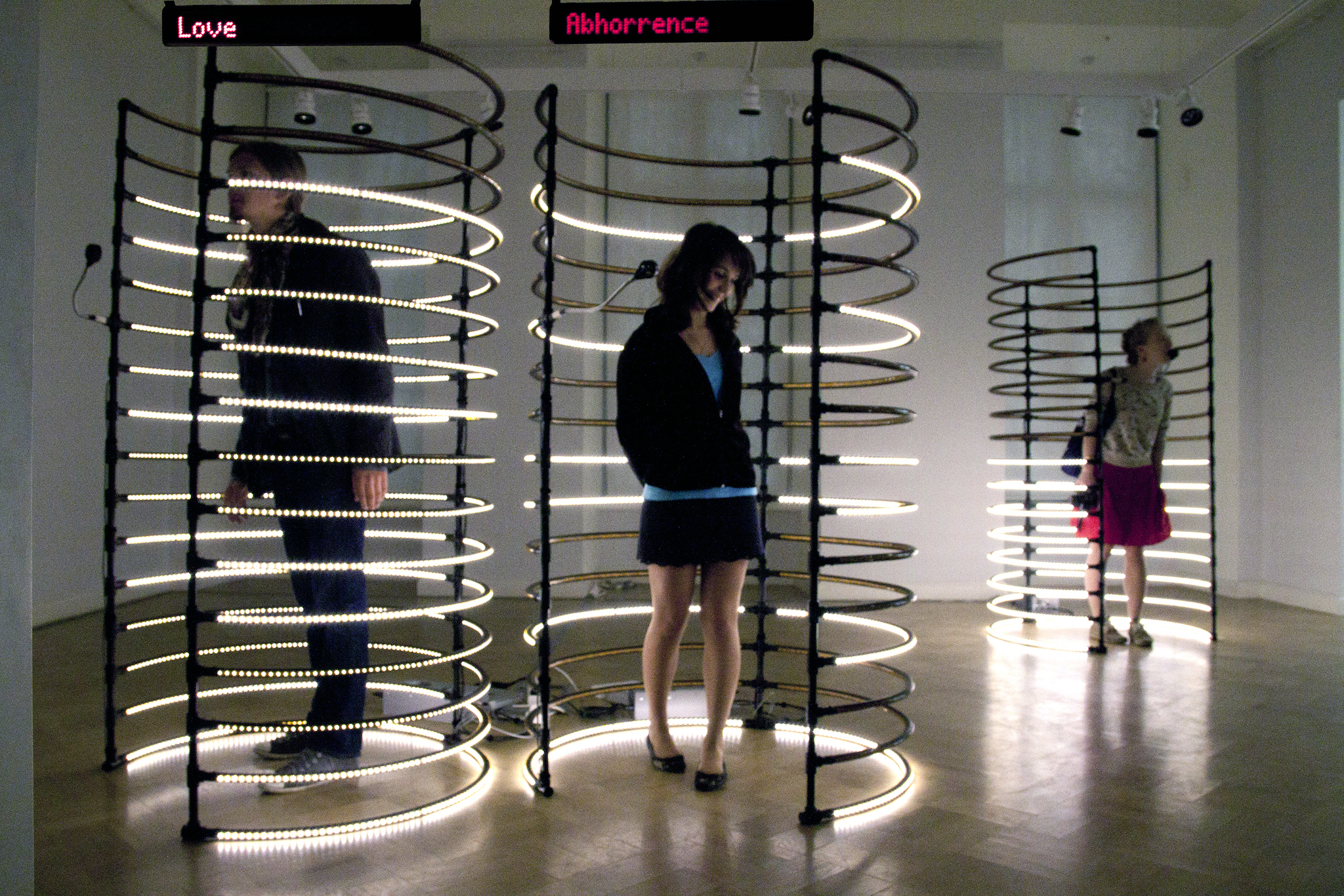 Elena Gubanova and Ivan Gonorkov (Russia) exhibited "Danae" a media object or multimedia sculpture made of 'living' round mirrors that 'quiver when a ray of light touches their surface'. This was very Expo '67. It was exciting to experience work made now that is somewhat more advanced than work madein the 60's but picks up where that work left off. 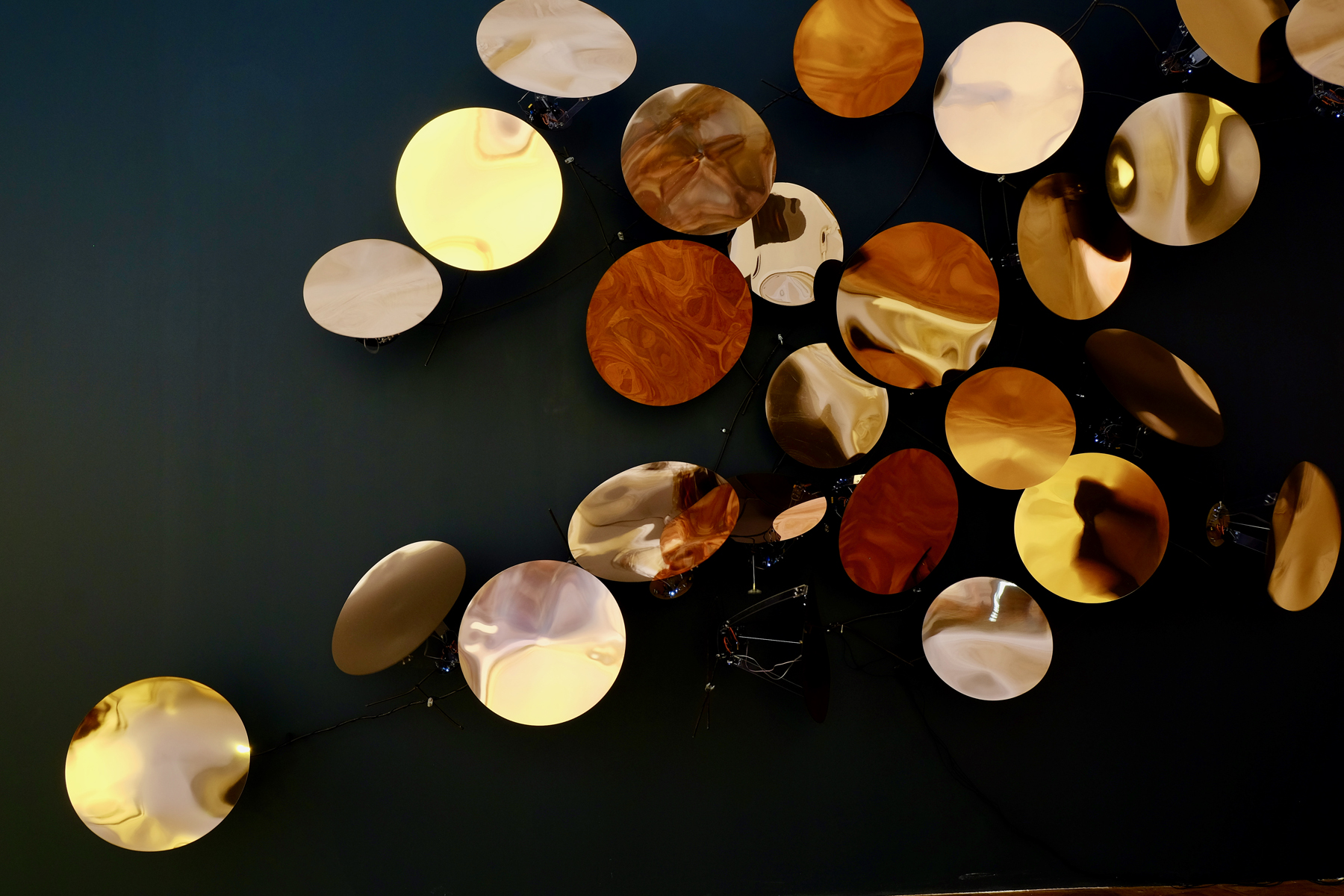 William Latham (UK) showed his Mutator program on VR kit. The VR experience means being placed inside a mutating organic form which is within 'a textured mirrored room'. Latham collaborates as ever with Stephen Todd, as well as with Lance Putnam and Peter Todd. Latham also collaborates with Guido Salimbeni and Stephen Todd (UK)on a piece called "Morandi Pot-traiture" which uses Advanced Machine Learning techniques with which the computer uses the machine learning to create 'a unique Giorgio Morandi style pot painting' basedon the viewer's face captured by web cam.

Machine Learning moves interactivity on as the computer can respond in a more sophisticated way to the user. Although all the works in the exhibition are very much at the start of something which will be amazing in the future.

Anna Frants (Russia-USA) presents a media installation called "Living Tapestry" with computer programming by Aleksey Grachev and supported by Cyland MediaArtLab. 'Eyes' on the ends of robotic 'arms' track the viewer and so they become part of a video tapestry.

There are quite a few other works in this fascinating show and altogether it makes a very strong case for machine learning and how that is affecting what artists can do now.

Can the computer be creative? I would argue that with machine learning it is becoming at least a collaborator in the creative process, although it doesn't have the same challenges, desires and ideas as a human and therefore is an extension of the human still.